Get smart about your coverage options and discounts.

Be the first one to rate! Submit Review 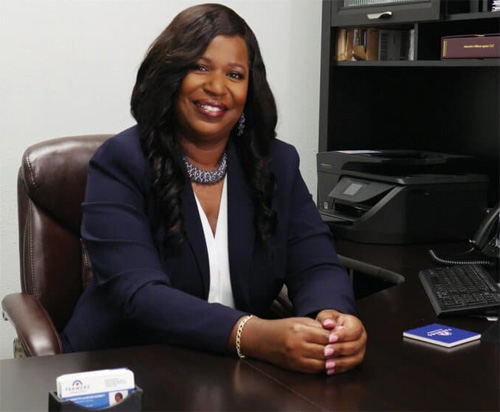 Presented with the opportunity in 2018 to expand her business in the insurance industry to the Gainesville area, Shannette L. Duncan became
the first African-American female agent in the State of Florida for Farmers Insurance. Shannette’s 33-year experience in the insurance industry began in Gainesville as a customer service representative and now, she returns to Gainesville as the owner and CEO of the Shannette Duncan Agency, an insurance agency for Farmers center;”>Shannette’s journey in the insurance industry began in 1985 and her position as customer service representative quickly expanded to claims adjuster, sales management and community outreach. Desiring to increase her knowledge in the industry and general business matters, Shannette moved to Atlanta, Georgia in 1996 and completed her educational studies at Georgia State University’s School of Business Administration. She received her Bachelor of Science degree in Management.

Becoming licensed in both the Property and Casualty and Life and Health insurance industries, Shannette founded SLW Insurance Services, Inc. of Stone Mountain Georgia in 2006. While serving the Gwinnett, DeKalb and surrounding counties in Georgia, she became a member of the Atlanta
Association of Insurance Professionals.

Shannette’s excellence in sales and community outreach demonstrated over the years resulted in many awards and accolades. Her most notable accomplishments received as an agency owner are; The Making of a Champion Production Award in 2007 for writing the most insurance business among her peers, and The Fast Start Life Insurance Campaign Award in 2010 for providing the most life insurance to new and existing customers.

Shannette believes in the power of working in the community, volunteering with many organizations – March of Dimes, Hunger Walk, American Heart Association, Habitat for Humanity, and Atlanta Feed the Hungry. In appreciation of their support, SLW Insurance Services, Inc. sponsored a free healthcare screening to the Greater Atlanta communities.

The personalized service that comes with your Farmers homeowners coverage might be the best recommendation for adding a Farmers auto policy to your insurance portfolio. When you purchase an additional policy, you might also qualify for a multi-line discount. Call me today for more information.

Q Purchasing home, life, and auto is just one of many ways to save.

Farmers offers many discounts to help keep your insurance premiums as low as possible. One way you can save money on home and auto insurance is by purchasing both of these policies from Farmers. And with a highly trained agent by your side every step of the way, understanding the discount and coverage options that are available to you can help you make smarter choices and possibly save you even more money. Contact us today so we can review your insurance needs and help you choose the right options to maximize your savings.

Even if you don’t own a home, you probably own a great deal more than you think. Consider all of your furniture, electronics, clothing, appliances, and jewelry, as well as any art, books, or musical instruments you own. Renters insurance covers your personal property, and even covers you from liability claims while you’re renting.

Q Get on the Open Road with Farmers® Motorcycle Insurance

On a motorcycle, you can experience the road as you want, without barriers or boundaries. With Farmers, you can choose the coverage you want, with potentially specialized options like coverage for accessories and trip interruptions. Call me today to learn more.

Q take Farmers Insurance on Your Next Adventure

Farmers has spent the last 60 years getting to know outdoor enthusiasts. From boats, personal watercraft and off-road vehicles to motor homes, travel trailers and 5th wheels, we have an array of specialized coverage options. Call me today for more information.

Rate us and Write a Review